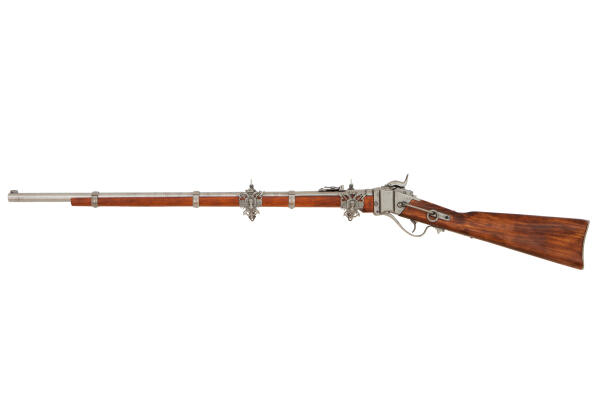 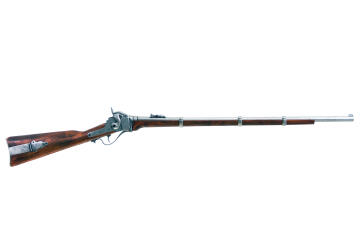 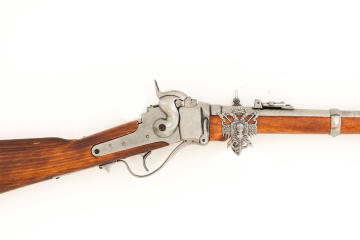 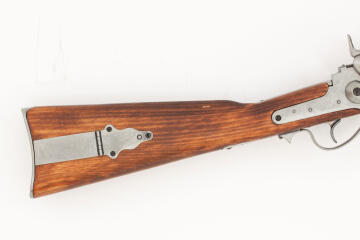 Reproduction of a rifle made of metal and wood, with simulated mechanism of loading and firing. The Sharps rifle, created from the design of Christian Sharps in 1848, was a bolt-draw loading that in addition to being able to be used as standard fulminating capsule, it had a rather unusual mechanism of priming. It contained a column of fulminating capsules and put one on the chimney each time the trigger was tightened, and the hammer fell, making it easier to fire. The Sharps was a sniper rifle, of great precision compared to other rifles of charge of the time, mainly due to its high cadence of firing by the mechanism of back load and manufacture of high quality. It was used during and after the American Civil War (1861-1865). It was expensive to manufacture, so only 11,000 units of the Model 1859 were made, which used the US Army's precision handles, known as the "Berdan Pullers" in honor of their leader Hiram Berdam. The rifle became an icon of the Old West due to its use in several films and books. Here you got the opportunity to by a piece of American history.