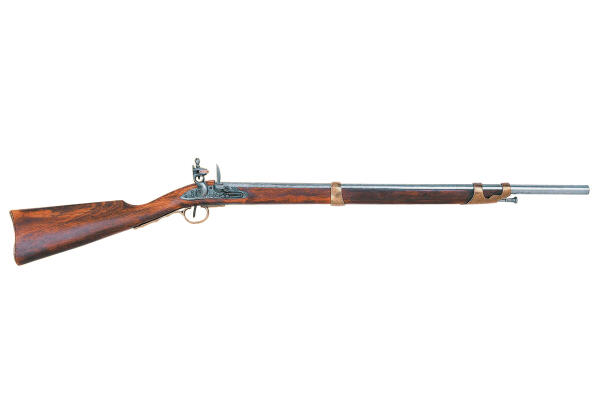 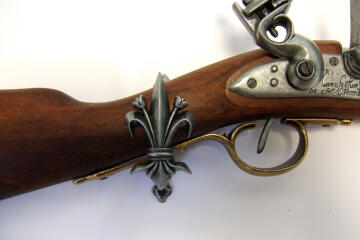 Reproduction of flintlock carbine of the Napoleonic period, made of metal and wood with simulated mechanism of loading and firing. The flintlock carbines had the blistering of a flint or flint stone, which when the hammer was triggered, it produced the spark that ignited the gun powder. These types of weapons required the manual recharge of their ammunition after each shot. The ammunition, which was introduced through the mouth of the barrel, consisted of gunpowder, projectile and paper wad, which served as a cap to keep the two previous ones compressed inside the barrel.
The carbines could be more precise than the pistols and gave a longer effective reach. However, the sequence of loading and firing was complex, so during the training recruits were required to repeat these movements until they could be performed instinctively amidst the tension and confusion of combat. In theory, a well-trained soldier could shoot five times per minute, but in normal combat it was a rate of two or three shots per minute or less if the confrontation lasted.
The trajectory of the bullet was imprecise and during the combat it was impossible to aim well. The only way to ensure certain efficiency was by grouping a high density of weapons on a reduced front, firing in as close as possible to the lowest possible distance. Even so, on many occasions, the fighters after shooting were forced to use the bayonet.

Napoleon Bonaparte (1769-1821), Emperor of France between 1804 and 1815, consolidated and instituted many of the reforms of the French Revolution. He is considered one of the greatest military geniuses in history and conqueror of the greater part of Europe. He commanded campaigns very successful warfare, although with certain similar defeats. His aggressive conquest wars became the largest military operations known until that moment in Europe, involving a number of soldiers never seen in the armies of that time.

Feel to be protagonist of these Napoleonic conquests of the early 19th century with this nice reproduction of this carbine!